At the age of 49, Keith completely shifted his professional career from being an officer at the Royal Air Force to working for Cambridge University. 10 years later, he ventured a new start once more and became a tour guide for Swimtrek, a British organiser of swimming holidays. 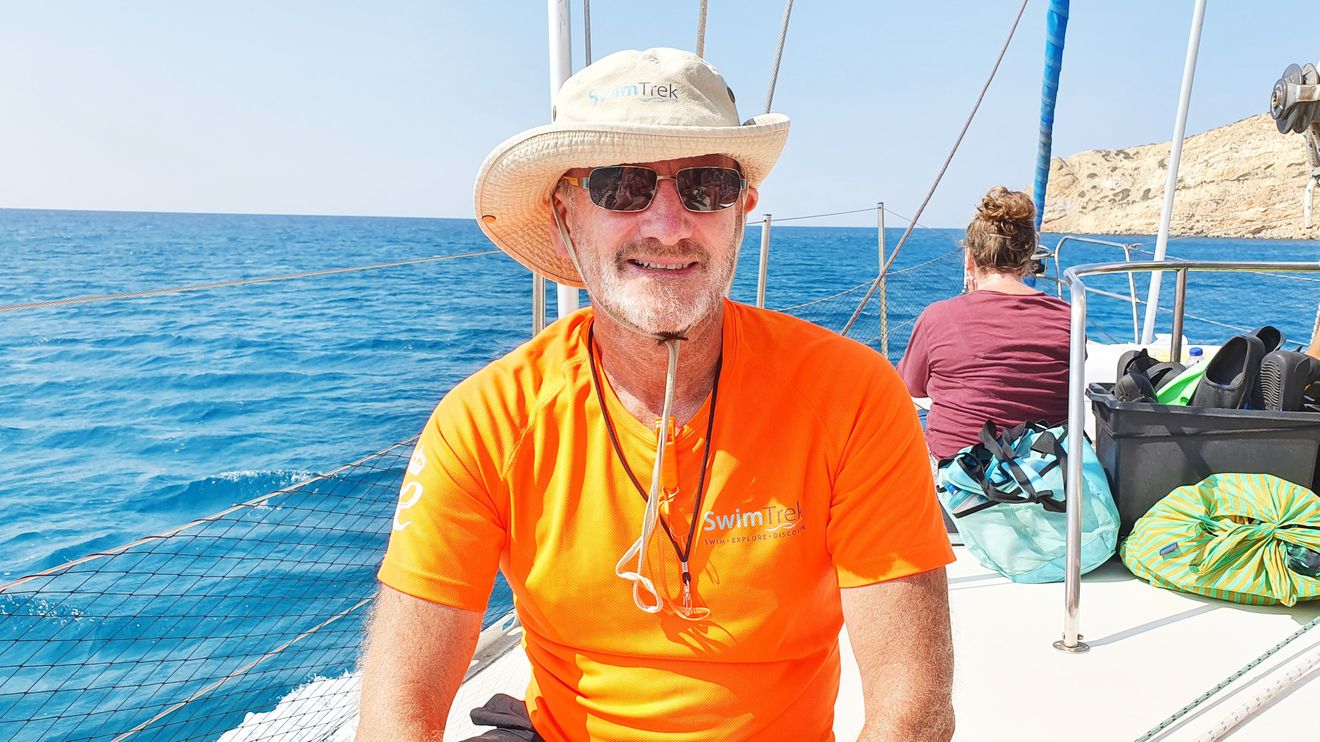 How did you start your professional career?

Leaving university, I did a series of part-time-jobs mostly as a barman before I joined the Royal Air Force (RAF) as a Junior Officer. I was actually looking at a career in hospitality management. However, I came across this job ad as a logistics officer in the RAF where the attraction was: You will get immediate responsibility and you have got to play lots of sports and go on expeditions, which instantly appealed to me. Initially, I signed up on the short service commission of 4 years, but I discovered the job suited me, and I think I suited the job, and that became a 30-year-career which began in 1979 when I was 21.

Where did this job take you?

I moved around a number of different bases in the UK. I was detached down to the Falkland Islands. I spent some time in Northern Ireland when it was a very troubled area. And then, my last tour was in Iraq.

How come you decided to quit your job at the military?

You typically retire from the RAF by the age of 55. However, I left aged 49. The military was downsizing, and they were offering an attractive redundancy package to people at a certain rank and age, and I got very lucky. It was a nice way of exiting the Air Force, because it was my decision, no one else’s, and that made me feel good about it. Especially in a career where the military tells you every year where you are going to be posted and you have no control of it. Particularly, having done the last tour, a proper job in a warzone was a nice way to finish. It was nice leaving at the top of my career.

I was living not far from Cambridge and a lot of ex-military officers work for schools and colleges. A friend of mine from the RAF who had retired a couple of years before me got this fabulous job at Cambridge and I went to visit him one afternoon. And as he walked me around the college, it was clear that everybody thought the world of it. And everybody thought he was doing a great job, so I thought “I could do that!”. I then applied through a post at Jesus College and I was shortlisted. For some reason, they then decided they were going to restructure and did not want to interview me. I asked for a debrief from my application and they were very kind. They gave me 45 minutes of advice on how to better tailor my CV to Cambridge. They then said: “By the way, next week, keep your eyes up, because we believe that Cambridge will be recruiting”. So I applied again, I got shortlisted and then I went for the interview. I met with all sorts of people in the college, including the students. It went really well!

Did Cambridge make you take interviews with the students?

Yes, the Cambridge Colleges do that. Because it’s all student-focused, they want to know if you get on with them. So I met with the student president and some older students. They usually meet with the candidates, even for the most senior positions. I think it’s very healthy!

How great that they force the intergenerational exchange! But why on earth did you decide to work for a college, after your adventurous job at the RAF?

Quite a lot of my colleagues were leaving at about the same time. A lot of them went to work as contractors for the military and got well-paid jobs. But they were moving on in the same environment, the ministry of defence, the civil service… and I wanted a break, I wanted a change, something fresh. I sensed that I also wanted to join an organisation that was known internationally, and you can be proud of being a part of. So Cambridge University ticked the box there.

How was your new job?

I really enjoyed it. It was not a difficult job. What’s very important in a Cambridge College is not much what you do but how you do it. Some of the more senior academics can be difficult to deal with, but if you exert a degree of enthusiasm and charm you would eventually break their resistance.

How come you decided to leave Cambridge after 10 years, aged 59?

Because I could come to Swimtrek. I was in the very fortunate position with a pension that never made me rich, but I don’t have to bother too much about money. I could afford to take early retirement. When I was 59, I bailed out of college. I left early, particularly because I sensed, when you get older, your physical power is going to diminish, and I wanted time to enjoy life. I’ve been a customer on Swimtrek since 2003. When I left the military, I didn’t really miss it. Cambridge was a great challenge and a new change. But the one thing I really did miss was swimming with the RAF squad, doing channel crossings and going on outdoor activities. Swimtrek filled that gap for me. I was a serial customer on their trips. They had the same spirit and sense that you have got with the military: the teamwork, the camaraderie, the humour.

Didn’t the fact scare you off that, in order to be a qualified Swimtrek guide, you had to do further training and get certificates?

The key qualification is beach lifeguard. So I went down to Cornwall to do the course with 8 other guys. They were all surfers in their early twenties, fit as fleas. It was really funny, because I was struggling running up the dunes on the beach and doing all that stuff. But then you had to do a time-swim and none of them had any background in competitive swimming. It was nice to come out of the water ahead of them, going “Who’s your daddy now?” 😊 The courses were quite straightforward. Some of the skills from the military were relevant, like leadership, organisation, teamwork. But there are things I’ve had to be careful of not overdoing. Like when you’ve got a large group of swimtrekkers, you’ve got to remind yourself that they’re on holidays. Insisting they march down to the harbour for sharp 9 o’clock, doesn’t always work. So just take a step back, be gentle and kind.

When will you retire for good?

I don’t know. So long as my wife doesn’t throw me out and so long as I remain physically fit and am able to do the job, I will continue working. It’s when you’re in Turkey and it’s really hot and you’ve got to carry an outboard engine across the town down to the harbour, get it on to the boat… those are the things that, as you get older, get tougher. And if you ever pick up an injury, it always takes longer to recover from that. So you have got to be cautious. But if you work on your fitness you can keep going for a long time.

Has your age ever been a topic of conversation between you and your employer (Swimtrek)?

It was a principal concern when I applied for the job. From being a guest here, I knew some of the people who work at the office, and I asked them: “Is there a problem?”. The answer was “No, so long as you get your qualifications.” Swimtrek is a professional company where, at the start of every season, they bring you down to the sea in Brighton and make sure that you can drive a boat safely and do all the rescues efficiently. Unfortunately, every year, there are 2 or 3 poor souls who have done all the preparations and don’t get through and are told they can’t work for Swimtrek. You also have to update your training qualifications regularly through the year. So they make sure that everybody can perform. And if you did fall below the standard requirement, they’d know about it quite quickly.

What keeps you going? Why don’t you just enjoy your retirement?

I am enjoying retirement! I think if it wasn’t for the challenge of Swimtrek and I couldn’t just come out for a week of sunshine and meet nice people, I’d find life just a bit ordinary. So, it’s a nice balance against the normal run of family life and looking after my grandson, which is wonderful. But it’s nice to have that variety.

Studies have shown that people are willing to work longer than the official retirement age if certain circumstances are given. What does Swimtrek do right, so you continue working for them?

I would never tell them or anybody, but I would pay Swimtrek to come work for them, because it’s so much fun 😊

The office is a small group of staff who are hugely professional and great fun so when you go down to the office in Brighton, you see all the computers, but in the background is a rescue board, somebody’s swimming trunks are drying, because they’re all down at the sea every lunch time. Particularly at the pre-season training, they work you hard for 3 days, in the sea, checking your rescue skills, etc. and then they take you to party in Brighton, which is wonderful, because you get a group of people from John’s age [comment: John is the second guide on the tour, aged 70] down to 17- and 18-year-old guys, all together having a great time. So just as you see customers form friendships on Swimtrek trips, so do the guides. It works both ways. It’s not like working with friends, it is working with friends.

What advice would you give to people in their middle-age regarding their attitude towards work?

Never be afraid of moving out of a routine or your comfort-zone. Go and do something that you are passionate about. Even if it means that you might not earn as much. Money isn’t everything. You only have one life, so make the best of it! 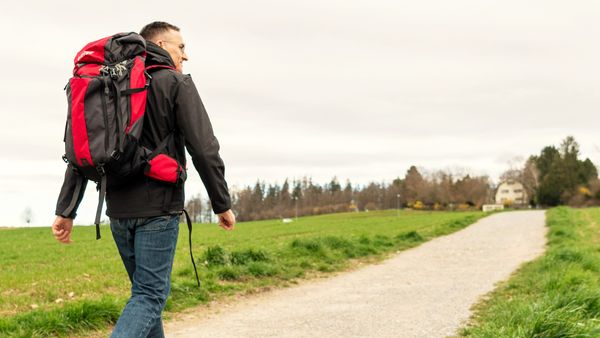 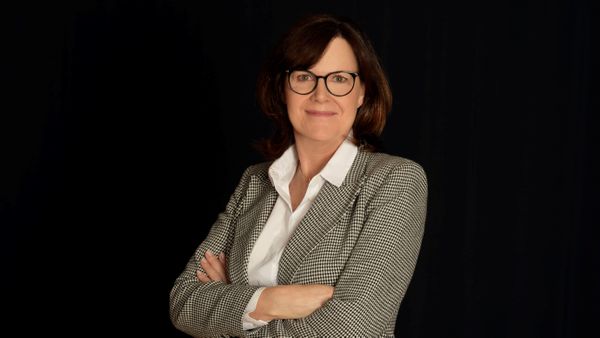 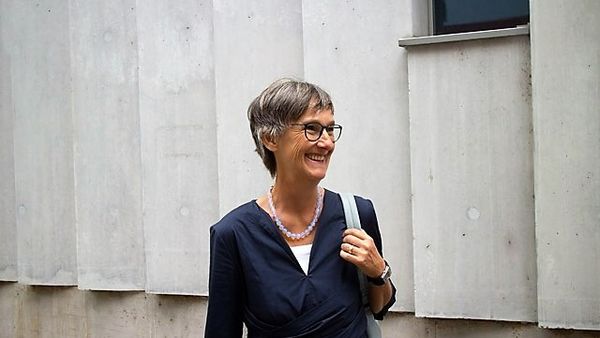